Federal Lay of the Land – September 2021 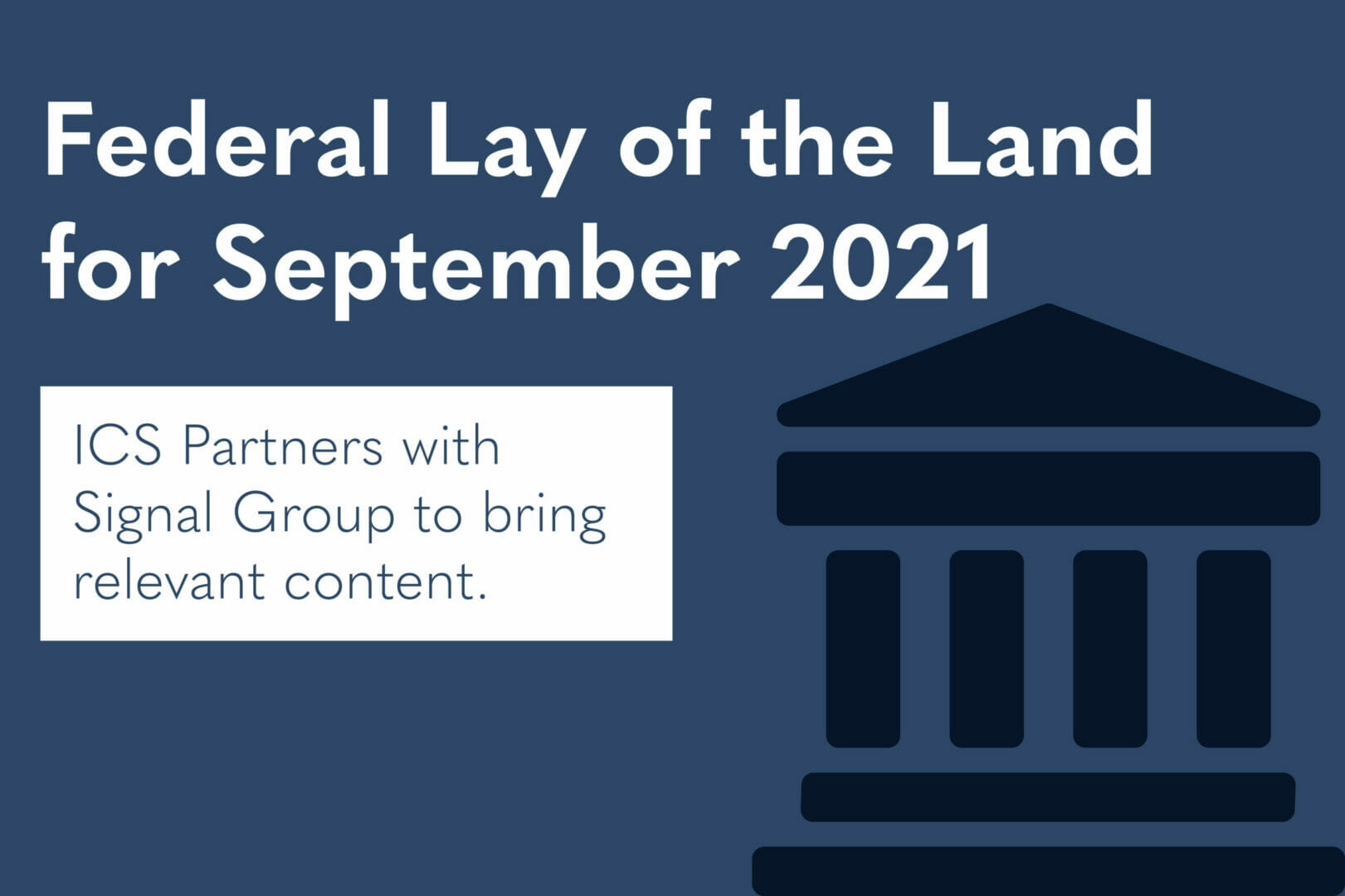 In collaboration with Signal Group, here’s the Federal Lay of the Land for September 2021. For more information, please reach out to Dave Bergeron at dave.bergeron@ics-builds.com.

Gross Domestic Product: The latest data from the Bureau of Economic Analysis estimated that U.S. GDP grew at an annualized rate of 6.6% in the second quarter of 2021. This growth in Q2 reflected the continued economic recovery and reopening of establishments, and continued government response to COVID-19. The increase in Q2 real GDP reflected increases in personal consumption expenditures, nonresidential fixed investment, exports, and state and local government spending.

BEA will release its third estimate of Q2 GDP as well as its GDP by Industry report on September 30.

Employment: According to data from the Bureau of Labor Statistics, the unemployment rate decreased by 0.2% in July, falling from 5.4% to 5.2%, and the number of unemployed persons edged down by roughly 300,000 to 8.4 million. This figure remains far above its pre-pandemic level of 3.5% in February 2020.

Pandemic unemployment benefits boosts expired on September 7. Next month’s employment situation release will be important to watch, as the confluence of this benefits cliff and the continued rise of the delta variant bear out on the labor market.

BLS will release the employment situation for September on October 8.

Inflation Concerns: According to the Bureau of Labor Statistics’ latest Consumer Price Index (CPI) data released on September 14, price levels rose 0.2% between July and August and are up 5.3% compared to August 2020. This rate of increase is continuing its downward trend compared to the increases of near 1% per month in the late spring and early summer. This is welcome news for Federal Reserve officials and White House economists, who are hoping to get inflation back near the Fed’s target rate of 2% per year.

Lawmakers in Washington are continuing to debate infrastructure legislation.

Following the August 10 Senate passage of the $1 trillion bipartisan Infrastructure Investment and Jobs Act (IIJA), Democrats are now in the depths of intraparty negotiations on a larger, $3.5 trillion package, titled the Build Back Better Act. Senate Democrats will aim to pass this package without Republican support using the budget reconciliation process.

Click here for a full summary of the package’s key provisions, broken down by House committee.

Next Steps. Now that the House has drafted legislation within the parameters of the $3.5 trillion budget resolution, all eyes are on the Senate to determine next steps. For the bill to pass the upper chamber, all 50 Democrats must be on board, and moderate Senators Joe Manchin (D-WV) and Kyrsten Sinema (D-AZ) are throwing cold water on some of the package’s provisions, as well as its overall size.

Manchin has been particularly vocal. On September 6 he dealt the first blow, authoring a Wall Street Journal op-ed titled Why I Won’t Support Spending Another $3.5 Trillion. On September 12 he told CNN’s Dana Bash that he would potentially support a bill in the $1-1.5 trillion range. And most recently, he was quoted at an event in Martinsburg, WV saying that he wanted to pause talks on a $3.5 trillion package until 2022.

Despite this lack of commitment from his party’s necessary final vote, Majority Leader Chuck Schumer has stated that he is poised for the Senate to move forward in consideration of the package. As this process plays out in the coming weeks, expect the bill to change significantly from the version produced by House committees.