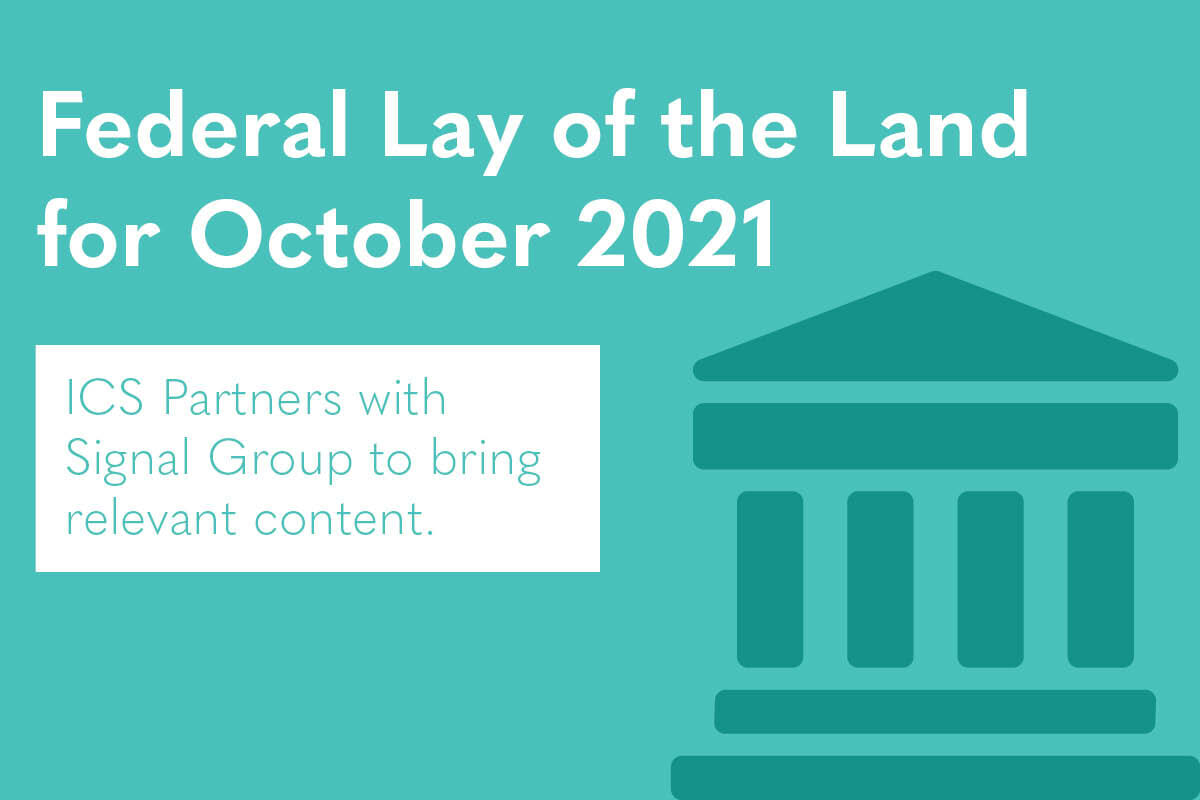 In collaboration with Signal Group, here’s the Federal Lay of the Land for October 2021. For more information, please reach out to Dave Bergeron at dave.bergeron@ics-builds.com.

Gross Domestic Product: The latest data from the Bureau of Economic Analysis estimated that U.S. GDP grew at an annual rate of 6.7% in the second quarter of 2021, according to the third estimate released. This growth rate is an increase over last month’s, second estimate that showed an increase in real GDP at 6.6%. The increase in this month’s third estimate is attributable to more complete source data.

Employment: According to data from the Bureau of Labor Statistics, the unemployment rate decreased by 0.4% in September, falling from 5.2% to 8%. The number of unemployed persons edged down by roughly 710,000 to 7.7 million. While unemployment rates are improving, rates remain elevated from their pre-COVID, February 2020, levels of 3.5% and 5.7 million.

BLS will release the Employment Situation for October on November 5, 2021.

Inflation Concerns: According to the Bureau of Labor Statistics’ latest Consumer Price Index (CPI) data released on October 13, price levels rose 0.4% (seasonally adjusted) between August and September and are up 5.4% (before seasonal adjustment) compared to September Food and shelter contributed to more than half of the increase in inflation.

Prices for steel continue to rise, increasing 5.0% in September, following a 5.1% increase in August. Prices for lumber, on the other hand, have dropped 4.3% since August.

Struggling supply chains continue to be a key challenge impacting inflation. As bottlenecks linger, both consumers and businesses are shifting their behaviors. In particular, businesses have shifted from ordering just in time, to ordering just in case, leading to higher consumer prices. While the Biden administration hoped to ease delays by brokering a deal under which the Port of Los Angeles – the busiest port in the U.S. – would expand its operating window to 24/7, skeptics are unsure that this will meaningfully improve bottlenecks because of backlogs in trucking and rail.

Contrary to forecasting, prices are both rising higher, and staying high longer. Future price increase forecasts vary, with some expecting prices to remain high, and others expecting a level out over the next 12 months.

Lawmakers on Capitol Hill are continuing infrastructure spending negotiations into yet another month.

It has now been over 2 months since the Senate passed the bipartisan Infrastructure Investment and Jobs Act (IIJA). Since then, opposite wings of the Democratic party have been engaged in continuous deliberations over the mechanics of this bill’s passage and the crafting and passage of the Build Back Better Act, the social spending bill that the Biden Administration is aiming to pass via the budget reconciliation process.