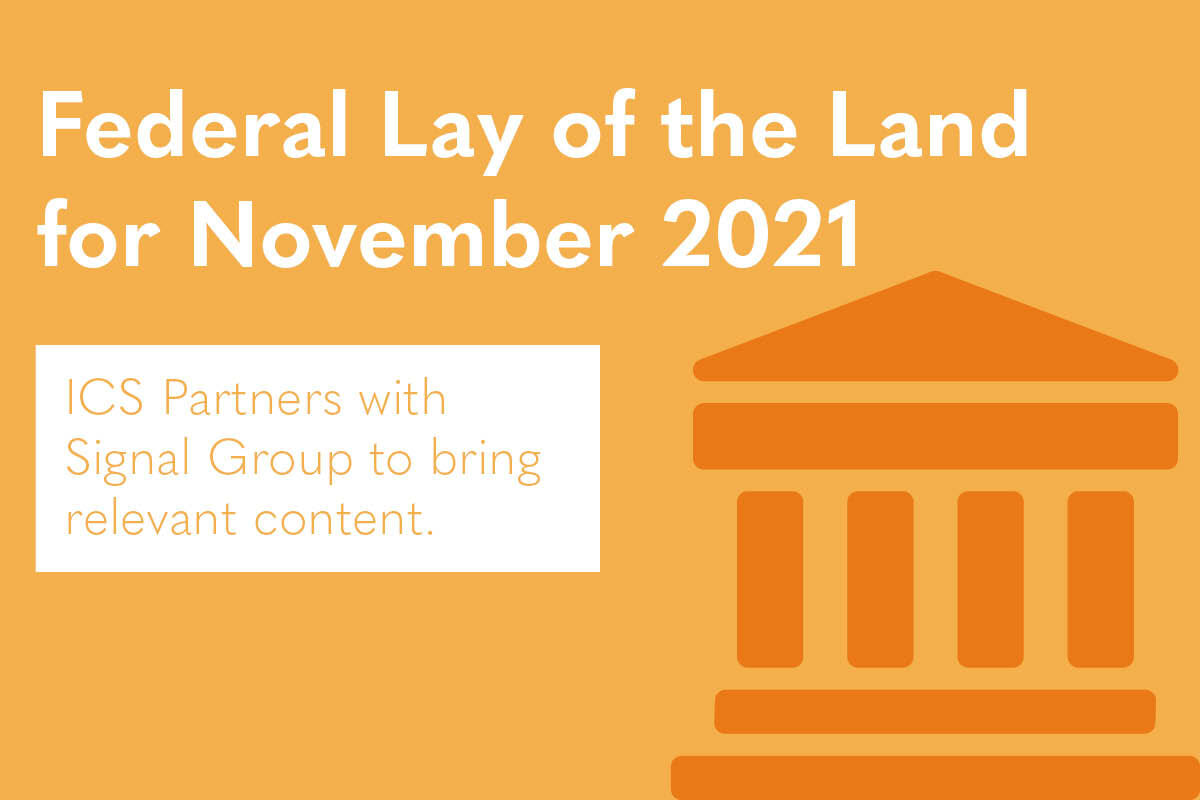 In collaboration with Signal Group, here’s the Federal Lay of the Land for November 2021. For more information, please reach out to Dave Bergeron at dave.bergeron@ics-builds.com.

The latest data from the Bureau of Economic Analysis estimates that U.S. GDP grew at an annual rate of 2.0% in the third quarter of 2021, according to the October advance estimate. This growth rate is far lower than that of second-quarter real GDP, which increased at a rate of 6.7%. The 2.0% advance estimate is based on source data that is incomplete or subject to further changes.

BEA will release its second estimate for the third quarter, based on more complete data, on November 24, 2021.

According to data from the Bureau of Labor Statistics, the unemployment rate decreased by 0.2% in October, falling from 4.8% to 4.6%. The number of unemployed persons edged down by roughly 300,000 to 7.4 million. While unemployment is improving, rates remain elevated from their pre-COVID, February 2020, levels of 3.5% and 5.7 million. Notable employment gains occurred in the following sectors: manufacturing, transportation, and warehousing, as well as leisure, hospitality and professional and business services.

BLS will release the Employment Situation for November on December 3, 2021.

According to the Bureau of Labor Statistics’ latest Consumer Price Index (CPI) data released on November 10, price levels rose 0.9% (seasonally adjusted) between September and October and are up 6.2% (before seasonal adjustment) compared to October 2020. This is the largest 12-month increase since the period ending November 1990. The index for all items – except food and energy – rose 4.6% over the last 12 months. Over the last 12 months, energy rose 30.0%, food rose 5.3%.

Prices for lumber and wood products have risen by 1.3% between September and October. This is a 6.2% year-over-year increase.

For months, the Federal Reserve and the White House maintained that inflation pressures would be “transitory” in nature. However, the release of the latest CPI shows that “transitory” is a relative term.

In a November 10th statement, President Biden directly addressed concerns about inflation and employment numbers, reiterating his stance that passage of his legislative agenda will not add significantly to the debt or inflation, and will bring more Americans into the workforce by “reducing the cost of childcare and  helping directly lower costs for American families by providing more affordable health coverage and prescription drugs—alongside cutting taxes for 50 million Americans including for most families with children.” He also stated that 17 Nobel Prize winners in economics agree that his legislative priorities will ease inflation.

As the Associated Press explains it, U.S. inflation struggles may be due to two key factors:

The Fed is now taking significant measures to control prices, with Chair Jerome Powell announcing the reduction of the monthly bond purchases it began last year as an emergency measure to boost the economy.

The long-awaited Infrastructure Investment and Jobs Act was passed by the House of Representatives on November 5 with a vote of 228-206, 82 days after it was passed in the Senate on August 10 with a vote of 69-30. The $1.2 trillion package was then signed into law by President Biden on Monday, November 15.

The Build Back Better Act (BBB) passed out of the House of Representatives, but full passage is still very much up in the air, with no commitment from key Senators on voting yes.

Following the signing of IIJA into law on November 15, the bill’s investments in infrastructure including roads, bridges, passenger rail, public transit, water, broadband, electric vehicles, and more will begin flowing out into communities in the coming months.

While the House Progressive Caucus had long refused to pass the bill unless the Build Back Better Act (BBB) was passed, the two bills were eventually decoupled following commitments from moderate Democrats to vote for the BBB following scoring on the impact of the bill on the federal deficit from the Congressional Budget Office. With this deal in place and enough progressives on board, the bill passed with a final vote of 228-206. 13 Republicans crossed the aisle to vote yes, and 6 progressive Democrats voted no.

To oversee the implementation of this funding, President Biden appointed former Mayor of New Orleans Mitch Landrieu as Infrastructure Coordinator.Click here for Signal Group’s latest overview of the package’s provisions and pay for mechanisms.

Final passage of the IIJA has cleared the previously very muddy waters on next steps for the Build Back Better Act, the Democrats-only Budget Reconciliation package focused on social spending and climate provisions.

Following the deal struck between progressive and centrist Democrats, the House of Representatives passed the Build Back Better Act on November 19 with a vote of 220-213. Only one Member, Democratic Rep. Jared Golden of Maine, broke party lines, joining Republicans in voting no on the bill. The one remaining variable is whether Democrats will be able to.

The bill that passed the full House, however, is much changed from its initial release out of House committees in September as a massive, $3.5 trillion package. The now $1.75 trillion, pared down version of the bill was released out of the Senate on October 28, making significant cuts with the goal of making the package palatable for centrist Democrats. Among the programs slashed during this process were K-12 school infrastructure, universal community college, and a clean energy incentive program designed to speed up the shift towards renewable power.

Even with these changes, Democratic leadership is still working to gain commitment from all 50 Senators. While this is now the final remaining domino, it does not mean a deal is close. With no votes to spare, getting across the finish line will be an uphill battle that may drag into next year or kill the bill altogether

With the IIJA signed into law and the BBB passed out of the House, Congress’ focus for the rest of the year will be Senate passage of the BBB, as well as solutions to the debt ceiling and government spending. In a November 14 ‘Dear Colleague’ letter, Senate Majority Leader Chuck Schumer outlined his plan to address this whirlwind of priorities. Below is the latest on these 3 items:

The rest of 2021 will be key in determining how this mashup plays out and how well Democrats are able to reconcile their intraparty differences. With Members heading home for the Thanksgiving holiday, expect Congress to hit the ground running when they come back for the month of December.