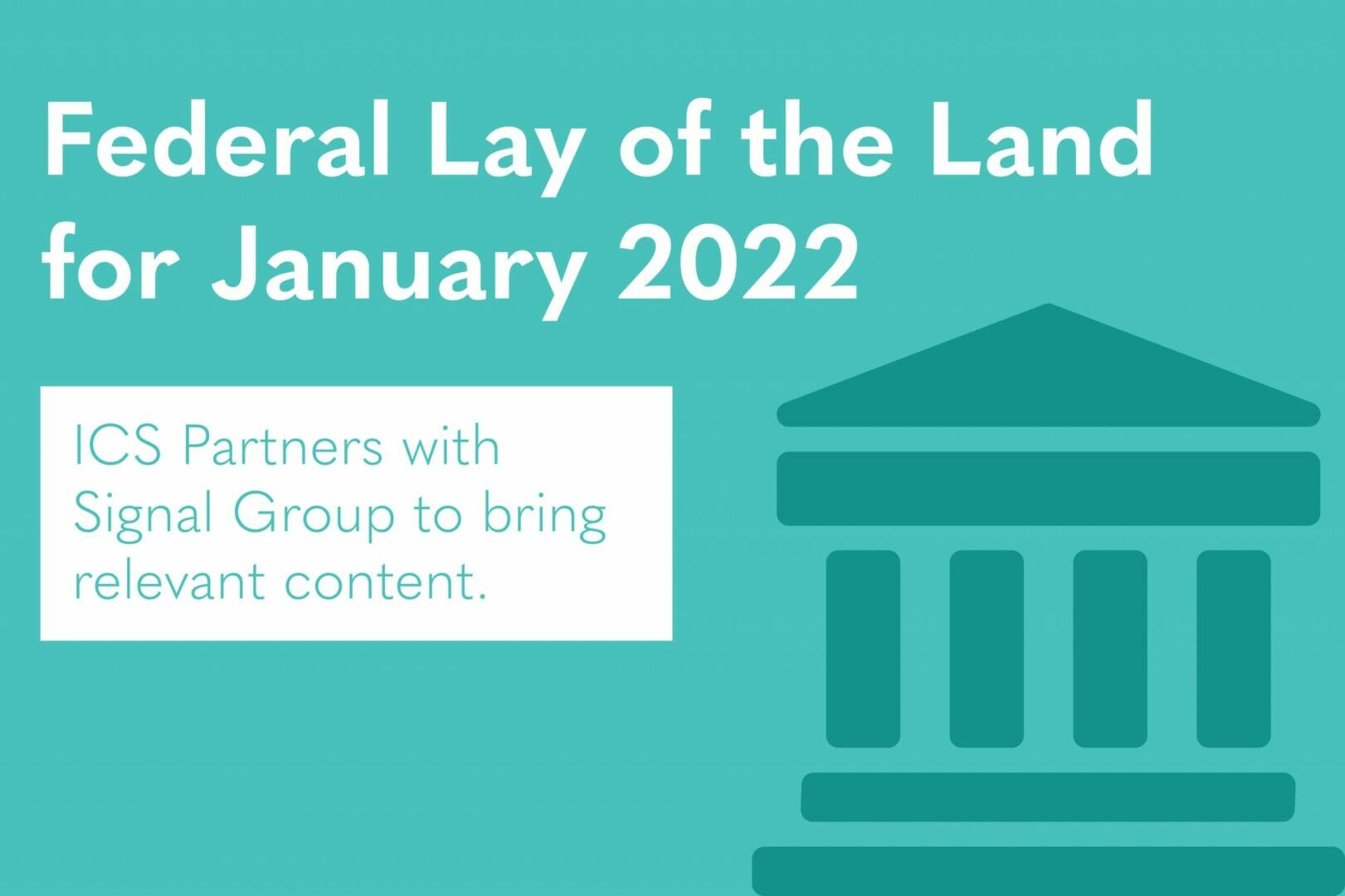 In collaboration with Signal Group, here’s the Federal Lay of the Land for January 2022. For more information, please reach out to Dave Bergeron at dave.bergeron@ics-builds.com.

The latest data from the Bureau of Economic Analysis estimates that U.S. GDP grew at an annual rate of 6.9% in the fourth quarter of 2021, according to the ‘advance’ estimate. This growth rate is far higher than that of third quarter real GDP, which increased at a rate of 2.3%.

BEA will release its second estimate for the fourth quarter, based on more complete data, on February 24, 2022.

According to data from the Bureau of Labor Statistics, the unemployment rate decreased by 0.3% in December, falling from 4.2% to 3.9%. The number of unemployed persons edged down by roughly 483,000 to 6.3 million. This latest period of improvement builds on trends over the last 9 months, and the U.S. is now nearing its pre-COVID-19 unemployment levels of 3.5% and 5.7 million persons.

BLS will release the Employment Situation for January on February 4, 2022.

According to the Bureau of Labor Statistics’ latest Consumer Price Index (CPI) data, price levels rose 0.5% (seasonally adjusted) in December and are up 7.0% (before seasonal adjustment) compared to December 2020. The Personal Consumption Expenditures (PCE) index, the Fed’s preferred method for tracking inflation, made a similar jump, increasing by 5.8% year-over-year in December after a 5.7% year-over-year increase in November. December provided the largest 12-month increase for both measures since June 1982, marking the second consecutive month of a 40-year high reading.

Amid rising prices, employee pay is also increasing, however, not enough to keep up with skyrocketing inflation. The Employment Cost Index, a BLS measure of pay and benefits, grew by 4% in Q4 2021, its sharpest quarterly increase on record. Some economists are concerned that, while this wage growth is good for workers, it may increase the risk of sustained high levels of inflation, as companies determine they need to raise prices to offset labor costs.

In addition to being problematic for consumers, rising price levels are becoming a massive liability for the Biden Administration and Congressional Democrats as they aim to pass the Build Back Better Act and other components of their agenda, as well as manage political outcomes in a midterm election year. All eyes are now on the Federal Reserve, as policymakers at the central bank have hinted that they are likely to raise interest rates at their upcoming March meeting and may raise them several more times throughout the year to fight back against price levels.

The Infrastructure Investment and Jobs Act, alternately known as the Bipartisan Infrastructure Law, was signed into law on November 15. Federal agencies are beginning to release guidance and disburse funds from the massive $1.2 trillion package.

As agencies focus on implementation of the BIL, the White House announced on January 21 the creation of its new Building Performance Standards Coalition, a partnership between 33 state and local governments dedicated to delivering cleaner, healthier, and more affordable buildings. The coalition will aim to collaborate with each other and the federal government on establishing best practices in the green building’s space, including through implementation of relevant BIL provisions.

On January 31, the White House, under its Infrastructure Implementation Coordinator Mitch Landrieu, released the first edition of its Bipartisan Infrastructure Law Guidebook, providing state, local, Tribal, and territorial governments with the most comprehensive and up to date information on the over 375 programs included in the legislation. The full guidebook is linked HERE.

The latest information on notable programs related to building resiliency, energy efficiency, and water infrastructure is as follows:

The Build Back Better Act (BBB) passed out of the House of Representatives on November 19, however, after many months of negotiations, the likelihood and potential timeline for full passage of the legislation remains unclear.

The Biden Administration and Congressional Democrats have targeted March 1, the date of President Biden’s first State of the Union address, as their new ‘deadline’ for passage of the bill. As negotiators get back to work, President Biden is expected to spend the month of February in a much more public-facing manner, pushing for progress on components of the package. If a bill does make it across the finish line, it is likely to focus most heavily on climate and clean energy-related provisions, as those sections of the have received the least pushback from Democratic holdout Sens. Joe Manchin and Kirsten Sinema.

With the implementation of the Bipartisan Infrastructure Law and ongoing negotiations surrounding the Build Back Better Act taking up most of the D.C. airwaves, one item that has slipped under the radar is passage of a Fiscal Year 2022 spending bill. Following a series of Continuing Resolutions (CRs) to keep the government open, the latest deadline for passage of an appropriations bill or another CR is February 18.