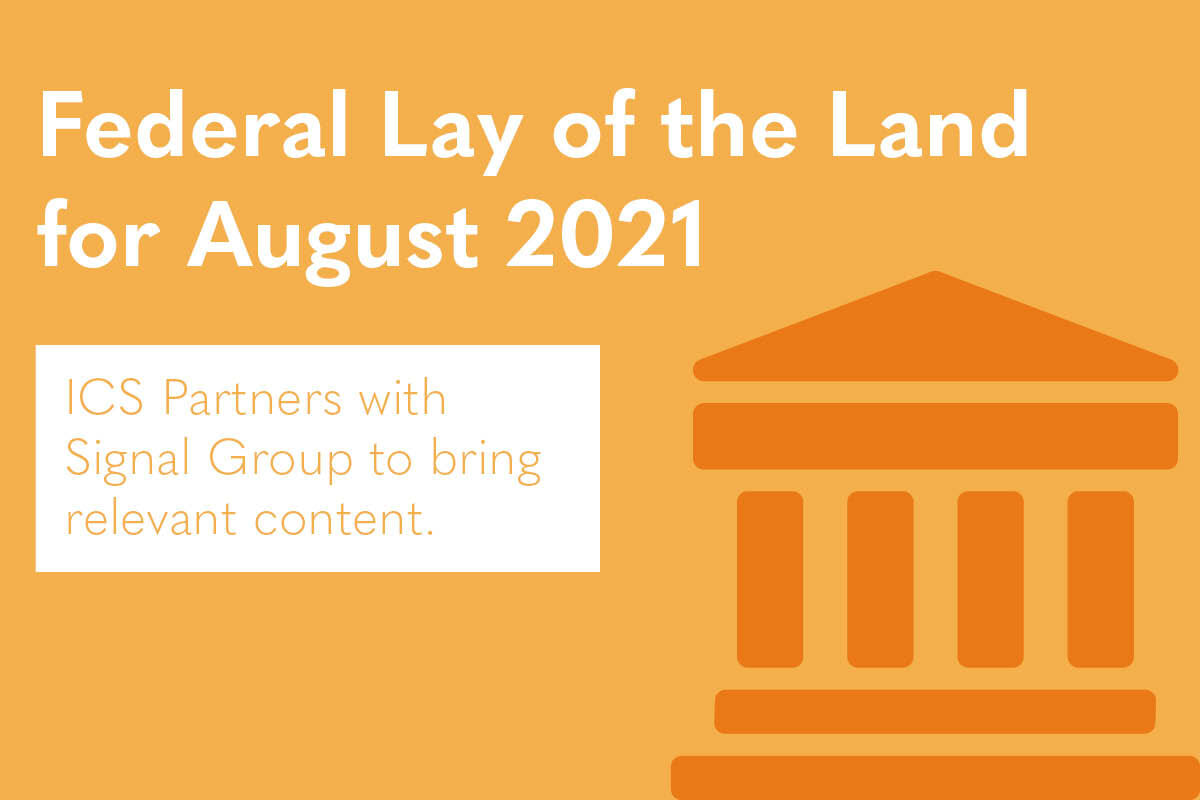 In collaboration with Signal Group, here’s the Federal Lay of the Land for August 2021. For more information, please reach out to Dave Bergeron at dave.bergeron@ics-builds.com.

Gross Domestic Product: The latest data from the Bureau of Economic Analysis estimated that U.S. GDP grew at an annualized rate of 6.5% in the second quarter of 2021. This growth in Q2 reflected the continued economic recovery and reopening of establishments in the quarter, as personal consumption expenditures on goods and services were a leading factor in the increase in GDP. Personal income and savings were down significantly across all measures, led by this increase in personal consumption expenditures and by a decrease in government social benefits related to COVID-19.

BEA will release its second estimate of Q2 GDP on August 26.

Employment: According to data from the Bureau of Labor Statistics, the unemployment rate decreased by 0.5% in July, falling from 5.9% to 5.4%, and the number of unemployed persons fell by 782,000 to 8.7 million. This figure remains far above its pre-pandemic level of 3.5% in February 2020. Following a spike in June, the unemployment rate for the construction industry decreased significantly in July, falling by 1.4 points to 6.1% from its rate of 7.5% in May. The June rate is up only 0.6 points from its pre-pandemic level of 5.5% in February 2020.

With federal pandemic-related unemployment programs set to end on September 7, all eyes will be on the impact this benefits cliff has on millions of jobless Americans, as well as the significant labor shortages impacting sectors including retail and hospitality.

Inflation Concerns: According to the Bureau of Labor Statistics’ latest Consumer Price Index (CPI) data released on August 11, price levels rose 0.5% between June and July and are up 5.4% compared to July 2020. This rate of increase is down from those seen over the previous 4 months – 0.7%, 0.8%, 0.8%, and 0.9% respectively. Economists reacted positively to the new numbers, with some saying that the inflation spike associated with the reopening of the economy appears to have peaked.

The July numbers give credence to the camp of economists characterizing this period of inflation as transitory in nature. Spikes in sectors including used cars and airfare that accounted for an outsized increase of past months’ price levels have cooled. However, prices in the hospitality and service sectors remain high. The next few months will be telling for whether we’ve truly crested the inflation behemoth associated with reopening the economy.

ESSER III Applications Due October 1, 2021: Each district must complete both an application for FIN16/includes facility work and for FIN161/ devoted to learning loss programming to include a safe return to in-person learning plan, asset map, needs assessment, community engagement, tribal consultation.

Infrastructure debates on Capitol Hill are continuing into yet another month. On August 10 the Senate passed its long-awaited $1 trillion bipartisan infrastructure package, the Infrastructure Investment and Jobs Act, with a vote of 69-30 following several rounds of negotiations between key lawmakers and members of the Biden Administration.

The Senate is now turning to consideration of a second, larger package, slated to contain $3.5 trillion in spending. Senate Democrats will aim to pass this package using the budget reconciliation process, which will require 0 Republican votes, as it allows the majority party to circumvent the 60-vote supermajority necessitated by the filibuster.

Further details on both packages are below.